Find this article at:
go.ncsu.edu/readext?846532
— Written By Blake Williams and last updated by Jessica Ham

Across western North Carolina, the dead remnants of many giant hemlock trees still stand. A majority of these trees met their demise in the early 2000s, when hemlock woolly adelgid (Adelges tsugae) made its way up and down the eastern seaboard. As a result of this rampant spread, populations of Eastern (Tsuga canadensis) and Carolina (T. caroliniana) hemlocks were decimated, and the forest ecosystems within which they play a pivotal role were severely impacted.

For the past 20 years, it has been widely accepted that the only effective way to manage HWA is through chemical control, mainly through spraying trees with horticultural oils, soil drenching or basal root injections of products containing imidacloprid or dinotefuran (active ingredients in the commonly sold treatment products, Merit and Safari) within the home landscape. Imidacloprid and dinotefuran chemical treatments are based on the trees’ calculated volume. Chemical treatments on large individual trees, multiple trees, and/or large hemlock hedges in the home landscape are expensive and labor intensive. In “high visibility/high traffic” areas like National Park campgrounds and gated communities, some large scale chemical treatments were carried out, but at considerable expense. However, a less-costly, broader area biological control solution is on the horizon.

Laricobius nigrinus is a predatory lady beetle species native to the Pacific Northwest (Figure.1). It feeds on hemlock adelgids in stands of western hemlock (T. heterophylla) with a very high rate of predation. Each beetle is believed to eat up to 8 adult adelgids per day and each beetle larva can consume 200 to 250 HWA adelgid eggs & ‘crawlers’ in a growing season! It was one of the original biological control species brought into western North Carolina as early as 2003 to try to control HWA on the East Coast. However, it was difficult to raise in a lab setting, which meant that all released specimens had to be collected and transferred from the West Coast. This, along with a low predicted yearly rate of spread, caused the scientific community to doubt its potential as an effective long term, broad spectrum control for HWA. 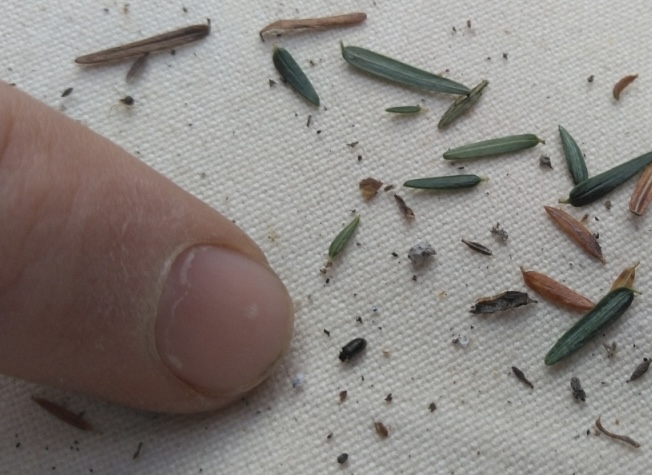 Here in the High Country of northwestern North Carolina, local entomologist, Dr. Richard McDonald, released several thousand Laricobius nigrinus beetles beginning in the mid 2000s. It has been his personal mission to attempt to document the successful establishment of the beetle and to protect the area’s native hemlocks. Over his career, Dr. McDonald has released over 20,000 adult beetles in the High Country and many specifically in Watauga County.

Due to Dr. McDonald’s efforts and years of release data, Watauga County Cooperative Extension decided that a survey of L. nigrinus presence within the county was warranted. Information on the spread and presence of Laricobius in Watauga County would allow Extension agents, landscapers, and arborists to make the most accurate recommendations to home and land owners. If the beetle could be found to be prolific in HWA-affected trees in localized areas, property owners could then decide whether or not to treat with chemicals or simply allow L. nigrinus to do its job—keep trees alive by eating adelgids.

Private residents volunteered to participate in the study via a community survey posted on Extension social media. These ‘volunteer sampling sites’ were added to a database created in ArcGIS, which also included Dr. McDonald’s release sites as well as predicted rate of spread buffers from information from a 2012 Virginia Tech research study. Since L. nigrinus beetles emerge from the leaf litter under hemlocks to begin their predation cycle when the weather turns colder (late October/November), convenience sampling began along roadways and at volunteer sampling properties in mid November, 2021. Hemlocks were sampled only if HWA was present by using a fabric ‘beat sheet’ placed under infested foliage and tapping branches to dislodge any beetles present for counting. “Clean” trees were not sampled. Of the 42 locations sampled, 36 were found to have L. nigrinus. This can be seen on the map in figure 2. Areas around historic release sites in the southeastern corner of the county were not sampled due to heavy known presence of Laricobius surrounding gated communities where large-scale releases have occurred in recent years. 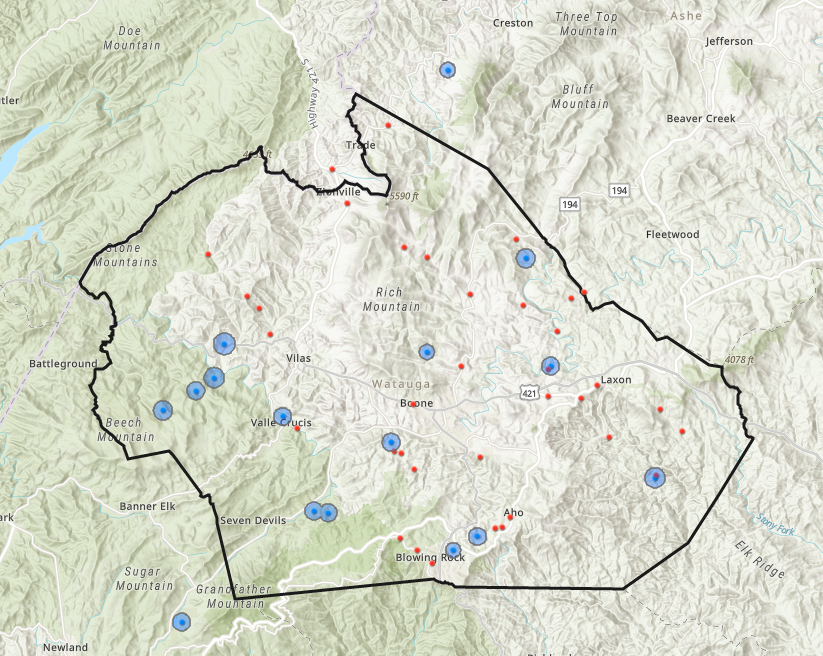 Figure 2. Mcdonald’s historic release sites (Blue dots) along with the predicted rate of spread from 2012 VA Tech study (Blue Buffers). Surveyed locations from 2021 (Red dots) where Laricobius nigrinus was found to be present.

While the 2012 study from Virginia Tech predicted that L. nigrinus only spreads at a rate of 39 meters per year, Extension’s sampling results show that it spreads, on average, roughly 236 meters per year, or at a 600% greater rate than predicted from the 2012 study. The furthest surveyed point from a prior beetle release location, was calculated to have a spread rate of roughly 854 meters per year, or roughly 2200% greater than that of the VA Tech study. Factors such as weather, wind patterns, rates of HWA infestation & beetle reproductive success rates, etc. could be reasons for this difference, but the bottom line is that L. nigrinus is prolific across the county, which is great news for landowners concerned about their hemlocks. Additionally, due to a warmer November than previous years, it is possible that adult beetles had not emerged yet from some of the sampled areas where beetles were not found during sampling. 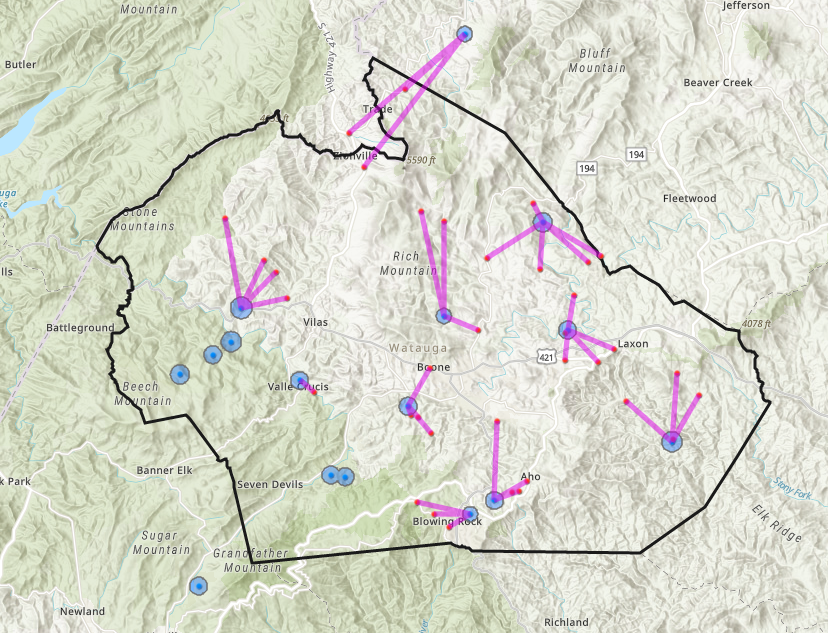 While not providing a completely precise rate of spread, this survey shows that previous studies of L. nigrinus predicted spread could be significantly underestimating its actual rate of spread. The 2021 survey results indicate that L. nigrinus could be a more effective biological control method for managing remote woodlots, natural forests, and large tracts of land than previously indicated. Further research and broader survey studies should be conducted to see if L. nigrinus is spreading at faster rates than expected across the entire release range, especially in Southern Appalachia.

For High Country residents, what does this survey and maps mean for your hemlocks? The survey showed that L. nigrinus is very widespread throughout Watauga county, meaning that most hemlocks found within the county with sometimes even minor HWA infestation ALSO have the beetle present on these trees feeding on adelgids–keeping the trees alive. Ironically, in order for the beetle to be present, the pest also has to be present. So, while hemlocks may still show some damage and ‘cotton-ball egg sac’ residues from dead adelgids, they should not wind up dying like trees did in the past. This is good news for the hemlocks in our natural forest settings, because no conventional chemical treatment needs to be done. For hemlock trees & hedges within the home landscape, homeowners can choose to continue with conventional chemical treatments (to keep trees ‘clean’) or not treat at all. It depends upon the homeowner’s threshold for aesthetics. However, a chemically treated ‘clean tree’ will NOT host Laricobius beetles as there will be nothing for them to feed on, leading to the need for additional future treatments as treated hemlocks eventually become re-infested.