Find this article at:
go.ncsu.edu/readext?670399
— Written By Micah Orfield 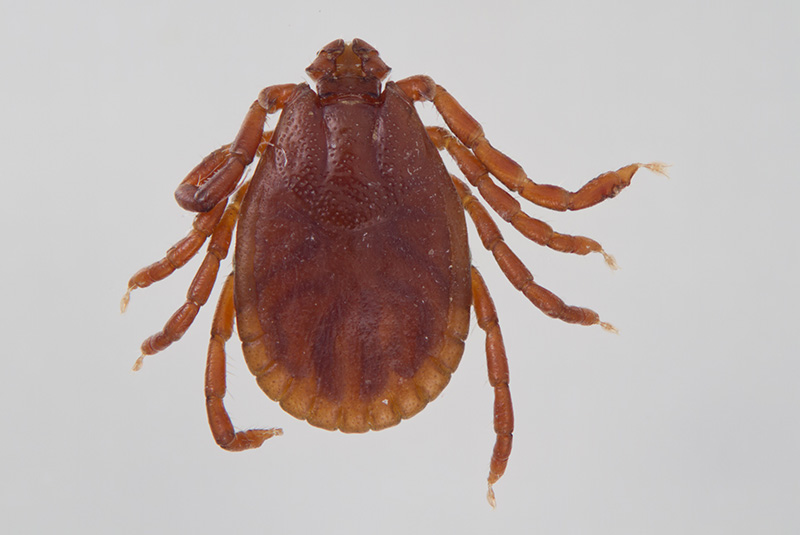 The Asian Longhorn Tick and More….

There are four common tick types and each is a vector for other issues. Ticks need to have a different host for each stage of their life cycle: Egg, Larva, Nymph, and Adult. The Black Legged Tick has a life cycle of about 2 years and is commonly known as a vector for Lyme Disease. The LoneStar Tick transmits Ehrlichiosis and is known to be associated with a red meat allergy for those bitten. The female is identified by the white dot or star on her back. The American Dog Tick bites are typically in the Spring and Summer and are a vector for Rocky Mountain Spotted Fever. The Brown Dog Tick can be found on dogs for each stage of its life, but can bite humans. It spreads Ehrlichiosis among dogs.

How is the Asian Longhorn Tick different? The life cycle is very quick in that the tick can reach maturity within 6 months. The females reproduce without a male present, so a single tick trans-located somewhere else can reproduce. The female can lay between 2,000-4,000 eggs.

Farmers should be concerned with the Asian Longhorn Tick because of the impact it has had on livestock farms. Ticks form large infestations on warm-blooded host animals including cattle, sheep, goats, dogs, and horses. The stress on the animal reduces its growth and production and in severe cases will kill the animal due to blood loss. The Longhorned Tick is known to transmit diseases such as theileriosis and ehrlichiosis, however, there have been no reports in the United States that the tick has transmitted the disease.

The tick is native to eastern China, Japan, the Russian Far East, and Korea. It has been found in Australia and New Zealand and has been a serious pest in these areas to livestock. In 2017, the United States Department of Agriculture’s National Veterinary Services Laboratories confirmed the first case of the Longhorned Tick in New Jersey. To date, it has been found in Arkansas, New Jersey, New York, North Carolina, Virginia, West Virginia, Pennsylvania, Maryland, and Connecticut. Close to home, the tick has been found in Carroll, Grayson, and Washington County Virginia as well as Surry and Wilkes County in North Carolina.

If you are concerned with Asian Longhorned Tick or think you have an infestation. Please place the tick or ticks in a vial with rubbing alcohol. All ticks can go in the same vial and contact N.C. Cooperative Extension, Ashe County Center and we will be glad to help you get those sent off.

How can you protect your livestock? This tick is responsible for not only poor producing livestock and potentially farm death losses, but it has also been shown in other places to transmit Theileria. Theileria has shown up in the United States, as close as Virginia and is believed to follow the appearance of the ticks. Livestock that has been affected are anemic and weak. There have been reports of late-term abortions, fevers, and cattle are typically reluctant to move. There are no known controls or treatments at this time. To help protect your herds and flocks try and control flow of ticks. Put out backrubs early and keep them charged with Permethrin. For more information on backrubs contact North Carolina Cooperative Extension, Ashe County Center. Limit your handling of livestock and ensure they have plenty of water and a good nutrition plan to help them stay healthy.

As veterinarians and other experts have more information regarding Asian Longhorned Tick and Theileria, it will be shared with you. For now please follow these recommendations and contact the Ashe County office for more information.

We also have a few other email lists you can subscribe to.